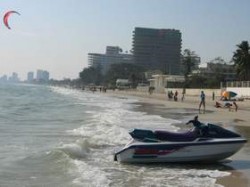 One of Thailand’s internet bloggers has won the first round of a battle he has taken up on behalf of foreigners being fleeced by Thailand’s Jet Ski scammers.

Thailand has lots of lovely beaches – and jet skis

Is it possible he has achieved what Ambassadors and Consuls have failed to do so far for years in Thailand by actually being angry?

Bull, who also writes under the name Talen, has been putting up pictures and videos of the scammers, all of which somehow ended up on Mayor Ittiphol Kunplome’s Facebook site.

Above: Thailand also has lots of jet ski scammers
Here is the answer the Mayor sent him promising to remove police from the equation as it appears Tourist Police cannot be trusted to deal with, er, tourists.

‘Khun Tim,
‘ I have been down to the beach today and walked along. It was only me and a few of my team so no one knew we were coming. I have warned all the jet ski operators myself that I am on their trail.
‘I met with the police and asked them to move quickly on the vdo evidence and look for ways to cause these people problems if they want to operate like this. You may have reservations about the police but there are some good ones and i know who they are. More coming next week as you will see.
‘Today I have had a meeting with Pattaya Police and discussed the vdos concerning the Jet ski issues in Pattaya. Additionally I have been down to the beach this morning and met with jet ski operators informed them that i now am concentrating on this issue and will be watching them.
‘More to come next week as we have more investigations and implement our plan for keeping police out of any negotiations which will be dealt with by my team. Part of this will be increased advertising of the helpline number and increases staffing by Pattaya City staff to intervene in any issues relating to jet skis’.

Looks like TB is going to hold him to his word.

He comments: ‘I truly hope the Mayor and his team can find a solution to this problem before more tourists get hurt or even possibly killed. I’ll be following this closely as I am sure a lot of other people will be. Pattaya is watching and waiting Mr. Mayor.’

You can find his TB’s investigations here:
http://thailandlandofsmiles.com/2011/03/02/pattaya-jet-ski-scam/

Well I have to say well done Mr. Bull. And I am awaiting the next instalment of this rivetting yarn.

If one browses the ‘Land of Smiles’ website one could be forgiven for getting the distinct impression that in the infamous conflict in Phuket between ‘JJ’ and Britain’s Royal Marines,  American TB, under the name Talen,  actually took issue with the Royal Marines and pedantically questioned the integrity of the Royal Marines Police Sergeant Tim Wright and Gavin Hill the producer of the programme ‘Big Trouble in Tourist Thailand’ – the first media to highlight Thailand’s jet ski scams.

He said little when the U.S. Marines paid up and even said sorry as well.

Just a BB. Its not that obvious

But if this previous niggling got to me then his more direct approach may well get at the authorities. It depends on how much the media pick up on this so I am glad to be of help.

Many posters at the time questioned why the Royal Marines did not pulverise JJ.  When the subject was aired on Thailand’s Channel 3, most Thais came down on the side of JJ.  But JJ, if one follows Phuketwan is till up to his old tricks making more bucks than ever.
Answer: Had the Royal Marines attacked ‘JJ’ they would of course all have been court-martialled.