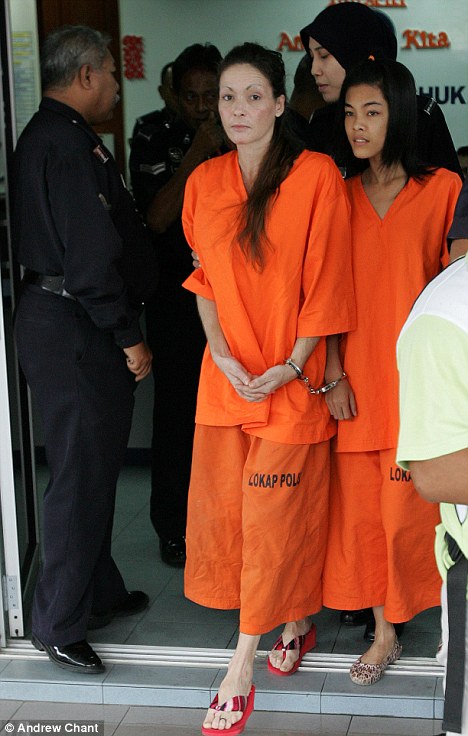 Dressed in orange prison robes and handcuffed to a fellow suspect, this is the daughter of a British nuclear scientist facing the death penalty in Malaysia for drugs trafficking.

Shivaun Orton, 41, and her husband were arrested after police found ?16,000 of cannabis, amphetamine, ecstasy and heroin during a raid on their home.

If found guilty, she could become the first British woman to be hanged since Ruth Ellis in 1955. But yesterday she insisted she was innocent. She said that while her Malaysian husband Abdul Harris Badileh was a womanising drug user, she had been kept as a virtual prisoner at their home 12 miles from a beach resort they own.

Miss Orton’s late father Mike worked at the Atomic Weapons Research Establishment in Aldermaston, Berkshire, for 36 years. She grew up in the Welsh coastal town of Harlech but has lived in Malaysia since 1995.

Yesterday she wept as she told how she had arrived at her present predicament.

Having passed her A-levels, Miss Orton left for the U.S., where she did an arts degree at Miami University. It was there that she met her husband-to-be. Despite her mother Shirley’s disapproval of the relationship, they married and 15 years ago moved to Malaysia, although she always kept her British passport and surname.

She said she left America with about ?20,000, with which she helped her husband set up the Ranting Resort, a group of chalets in Cherating. They have two sons, Jacob, 16, and Isaac, 14.

‘I soon learned what it was like to be an Islamic bride,’ she said. ‘My husband insisted I live across the border in Terengganu, which is a strict Islamic state and which I call Taliban Land. I cannot go out by myself. I have to cover up. I am there to serve my husband and family.

‘My husband on the other hand was out all the time, often with women and taking drugs. What angered me most was that the women were of no class at all, just tarts.

‘It got so bad that in 2003 I packed my bags and got in the car. I had made it almost 200 kilometres and was within an hour of Kuala Lumpur and the airport and a flight back to London when I was stopped by police at a checkpoint near a town called Bentong.

‘I was handcuffed and raped, twice each by two policemen, and one did it three times. My husband had phoned the police and set me up.

‘He later admitted that he had said I was a runaway prostitute and told police to give me a warning before sending me home.’
Miss Orton said she tried to make the relationship work for the boys’ sake.

‘But my husband still insisted on chasing women. Once I burst in and caught him with a girl and smoking heroin. Once I had got rid of the girl I asked him why. He said, ‘Because you do not get high and have fun with me’.
‘That’s when I agreed to do heroin with him, but only at the weekends, while my husband did it every day.’

The couple’s Ranting Resort at Cherating

Miss Orton was yesterday remanded in custody for a week with her pony-tailed 46-year-old husband and an 18-year-old girl, Ram Nazarul Shima. She is a friend of Jacob and was at the house when police raided.

As Miss Orton spoke, her husband listened with his head bowed. He said: ‘It’s true I forced Shivaun to stay and that I introduced her to drugs. I needed her to be dependent on me. If she was dependent on drugs she would not run away.

‘Our relationship was on-off. But we lived in separate rooms. The heroin was mine and it was in my room. It had nothing to do with her.’

Haul: Police recovered drugs including heroin, ecstacy and cannabis as well as money from the hotel