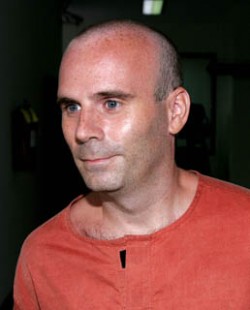 ‘I have, no cash, no job, and can’t work’ replies Mr. Swirly after being asked to discuss compensation to child’s father

Canadian paedophile suspect Christopher Neil, now better known as ‘Mr. Swirly’, came face to face with the father of one of his victims in court in Bangkok yesterday.

But when asked by the judge if he would like to discuss compensation Neil replied: ‘I could talk to him all day but I cannot do anything about it. I have no money. I have no job and I can’t work!’

Neil, 33, , who sparked off an international manhunt after German Federal Police cleared up swirly pictures which allegedly showed him having sex with minors, appeared at Bangkok Criminal Court accused of four counts of child abuse with young boys aged 9 and 14.

When the charges were put to him and he was asked how he pleaded, Neil from Maple Ridge, British Columbia replied: ‘I deny all charges.’

Just minutes earlier his state appointed interpreter lawyer Kittiporng Kiattanapoom had given on camera interviews claiming the Canadian, who had secured teaching jobs in Thailand and Korea, had confessed to indulging in oral sex with the children.

Neil was remanded back in custody to Bangkok’s Klong Prem prison where he has been since last October when he was arrested in Nakorn Ratchassima, North Eastern Thailand following a global manhunt initiated by an Interpol alert
.

The case was adjourned until October 7.

The children whose pictures were found on the internet are believed to be from Cambodia or Vietnam, but after his arrest the two Thai boys aged 9 and 14 claimed he had also molested them.