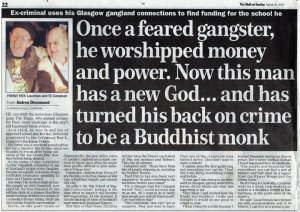 From Andrew Drummond,
Sihanoukville, Cambodia
He ran with the notorious Glasgow gang ‘The Tongs’, notorious for their razor slashings in the city’s old tenements.

As a kid he was in and out of approved school borstal and Barlinnie Prison, Glasgow, the infamous ‘Bar L’.
His father was a convicted armed robber and lorry hijacker. His
brother TC Campbell has convictions for assault and attempted murder