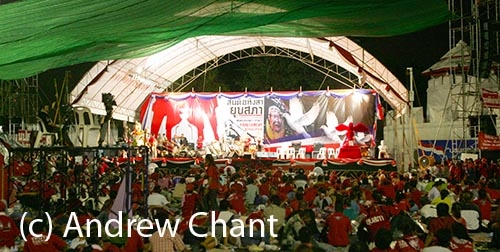 Tourists, among them scores of Britons, joined a mass exodus
from Bangkok today (Sunday) in the wake of bloody anti-government
demonstrations in which 19 died and over 800 were injured. Millions headed to the country for the New Year holiday and to
escape a city ravaged by red-shirted supporters of ousted Prime Minister
Thaksin Shinawatra.

They were joined by tourists from the Khaosan Road backpacker area of
Bangkok which was at the centre of the trouble on what is described here
as ‘Black Saturday’, when some 21 people were killed and eight hundred
injured in clashes between red-shirts and police.

Among those fleeing were primary school teachers Lorraine McKenzie and
Kim Shilton, who were hoping to get to the tourist island of Koh Samui.
Both described their weekend nightmare when troops fired on the crowd
and demonstrators fired back in kind with limited weapons and grenades.

Speaking at the end of  Bangkok’s Khaosarn Road, which now resembles a
war zone, Kim, aged 34, from Sutton Coldfield, West Midlands said: ‘We
were in our room in the Buddy Hotel when we heard what seemed like
fireworks. We rushed out to look but security guards barricaded us
inside.
‘There was a hug melee outside.  Then after a while there was a big
bang.  Bombs were going off, people were shooting, and the Thai hotel
staff members were trying to keep all their guests inside all along the
road’.
Added Lorraine, 24, from Cowdenbeath, Fife:  ‘We watch as a running
battle took place within yards. There were demonstrators with big batons
charging and I saw one throw a petrol bomb which hit a soldier and set
fire to his trouser leg.
‘Staff at the hotel rushed out to help put the fire out.  We saw people
from both sides being taken away in stretchers.  It was an absolute
nightmare.
‘We had warned there would be trouble and intended to keep away from the demonstrations but did not know they would come to us.’
Another Briton, 19-yr-old Sarah Colvin said: ‘People started running and screaming. We were being shot at.
‘It shook us up a lot. We needed valium to sleep. A lot of people we’ve spoken to are getting out of here.’
Last night Bangkok there appeared to be a ceasefire.  But negotiations
have failed and more clashes seem inevitable.  The possibility of a
military coup, which Thailand’s Army chief said would not happen, to end
the month long stand-off was being talked about in diplomatic circles.

Shrine to the death of two redshirts at the mouth of Khaosarn Rd
Thai Prime Minister, Eton and Oxford educated Abhisit Vejjajiva, said
he deeply regretted loss of life and promised independent
investigations into all the deaths in a nationwide broadcast.
Red shirted members of the United Front for Democracy against
Dictatorship (UDD) who support former Prime Minister Thaksin Shinawatra
are calling for dissolution of parliament and for Prime Minister Abhisit
Vejjajiva to leave the country.
Thailand is split between those who love or hate Shinawatra, who was
convicted of corruption, and who fled the country while on bail.
Shinawatra, former owner of Manchester City F.C., has been banned from
Britain but has been stoking the fire of dissent in Thailand by making
frequent broadcasts to and also twittering encouragement to supporters
to unseat the democratic coalition Vejjajiva.
Shinawatra’s support base is primarily from North and North East
Thailand where poor farmers benefited from his policies of giving them
cheap loans, and an almost free health care scheme.
The internal strike has been described as a fight between the ‘elite’
and the ‘poor’ but the country is divided by many more issues with rich
and poor on both sides.