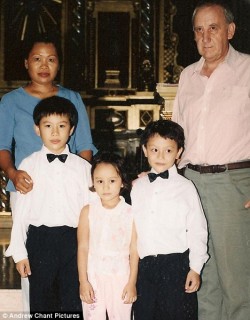 From Andrew Drummond, Bangkok
Tuesday June 30th 2009
Pictures: Andrew Chant
Link to Daily Mail story
A retired British surveyor who survived an attempted assassination by
communist rebels in the Philippines has been found murdered with his
throat cut during a robbery at his home.
The body of Paul Roberts, 61, was found by his 12-yr-old son Daniel at
their home in Barangay Tinigaw, on Payan island in the Central
Philippines.

Roberts, from Loughborough, took a blow to the head  then had his throat
slit when the raiders entered his he second floor bedroom at his home
in Aklan Province early on Monday.

Kalibo police chief Senior Insp. Arnolito Laguerta said: ‘At the moment
we are looking for the murder weapons, a knife and a hammer. We do not
know how many people were involved.’

Just three months ago he was treated for a gun shot wound in the nearby
town of  Kalibo, when he was shot  by a drive bygunman riding pillion on
a drive by motorcycle.

Roberts had a miraculous escape after a bullet just grazed his mouth tearing his lip.

His wife said: ‘I have no idea of the cause of the shooting Paul had no enemies. Probably just because he was a foreigner.’

Early Monday Amy was trussed up with electric cable, blindfolded and
had tissues forced into her mouth to stop her screaming, all while the
couple’s three young children were sleeping in nearby bedrooms.

Mrs. Roberts, who is recovering in a local hospital said: ‘My husband
nudged me to wake me up in the middle of the night because he had heard
something in the house. Then as I got up a man shone a torch into my
eyes. I could see his fat stomach but nothing else.

‘Then they grabbed me while I could hear my husband fighting with the
others. It was pitch black I had no idea what had happened to Paul. I
think there must have been 4 or 5 of them.

‘Finally at 5 in the morning I managed to get the tissue out of my mouth
and screamed for help. Our maid and our eldest  12-year-old son, came
into the bedroom, saw Paul dead in a pool of blood on the bed and took
me out quickly.’

Mr Roberts, a quantity surveyor, who also has two daughter aged 5 and 7,
met his wife in Singapore in 1993 when he was working as a quantity
surveyor for George Wimpey.

The couple later moved to Hong Kong where Paul worked on the new
international  airport. They married in 1996, had 3 children and moved
to Kalibo in 2002 to retire. The town is the stopping off point for the
nearby paradise island of Boracay.