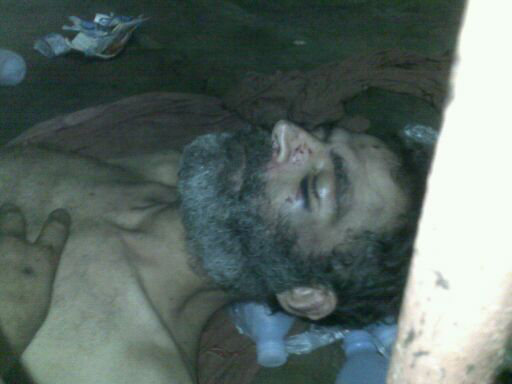 These horrific pictures show a 53-yr-old Briton wasting away naked in a Thai police station and cuffed to the bars of his cell.
He is reported to have been there for three months, but certainly since November 23th, but nobody has sent him for hospital treatment. This is a police station in the resort town of Pattaya, 100 miles east of Bangkok. His luxury pillow is a plastic water bottle.

This man is under the care of police. He was found sleeping under cars in in nearby Jomtien and was found to be on overstay.

The man known to others purely as ‘John’  growls like an animal and has mental health issues.  Sometimes he just sits and says nothing.  It’s now known he has been deported from Thailand before for overstaying his visa.  Thai police say he is unfit for court and do not know what to do with him.

They are awaiting on a decision from the British Embassy in Bangkok. But will, or should, the British government cough up for his treatment?

Unofficially Thai police say he has AIDs. That is why, they say, he is chained to the bars. It is to protect other inmates.

If however he is charged with an offence he should have appeared in court where judges could have seen his condition.

This man appears to be just one of the city’s casualties. Was his problem drink? women? money? or perhaps none of these or or all three. Nobody has come forward to help or tell the story.

And it’s at times like this that the neon lights of this city lose their allure.

This is a side of Pattaya not promoted in the tourist brochures.

‘Other prisoners have been giving him some of their food, ‘ said the photographer and activist Benny Moafi, ‘but nevertheless he is just skin and bone. He will just die if nobody helps him – and nobody is. All food has to be bought.

‘They say he does not want any help. But his condition is quite unbelievable.

‘Somebody called me to go to the police station to have a look. The man has been beaten and clearly needs both medical and psychiatric care. But nothing has been done. One of the prisoners says he has been there three months.

‘I tried to talk to him but could not get much sense. he seemed to be hallucinating.’

A spokesman for the Foreign and Common Wealth Office said: ‘ We are aware of the case. The man has been given consular assistance.’

Benny Moalfi, a Swede of Iranian descent, is a foreign  activist for prison and judicial reform in Thailand. Now a locally qualified lawyer, having spent 10 years on a jail, he says on trumped up charges of robbery and fraud,  he has had some success in making prison reforms.