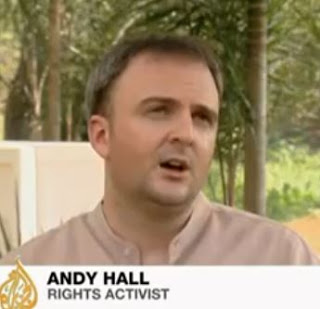 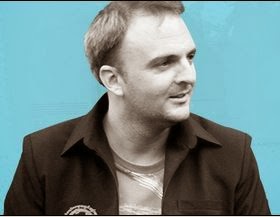 Congratulations are in order today for Andy Hall after the Supreme Court in Thailand finally dismissed a libel case brought over an interview he gave al-jazeera television describing conditions for Burmese migrant labourers at a Natural Fruit plant in the Thai province of Prachuap Khiri Kan.

Congratulations as well to the Thai courts. This case went through the Prakanong Court, the Appeals Court, and the Supreme Court all in the space of three years. That’s something of a record only beaten by the time it takes to sentence fishermen to death for giving Thailand a bad reputation for murdering tourists, which I estimate was about four weeks in the case of backpacker Katherine Horton on Koh Samui.

It’s also 12 years quicker than it took libel cases being brought against me by dodgy businessmen* in Pattaya to get to the Supreme Court where I won one, and lost one. That’s a Thai compromise.

The Thai judicial system,police, and military are national disgraces. Educated legal brains in Thailand know it: so does half the world – the half that knows where Thailand is.

The Supreme Court judgement is a victory. But unfortunately Andy Hall will lose the war. And by that I do not mean he will necessarily lose all his other cases.

I mean that these cases are built to wear him down, deprive him of all his cash and trash him emotionally and physically. And he’ll never get compensation for all that – and for that we all have to salute his courage.

As a victim of so called defamation SLAPP * cases I know what Andy has been going through. And we both know what Zaw Lin and Wai Phyo are going through after being convicted in the face of flagrantly flawed evidence in the Koh Tao murder trial.

We also know what Annie Hansen and Jack Hansen-Birtel are going throught trying to take on the son of a Chinese multi-millionaire in the Thai courts.

This is not just Natural Fruit he is up against. It is a country defending itself against the systematic abuse of migrants which it pretends does not exist.
For his sheer resilience Andy Hall commands all our support. Here follows the statement from Finnwatch:

Thailand’s Supreme Court today rejected the Attorney General and Natural Fruit Co Ltd.’s appeal in a criminal defamation case against Finnwatch researcher Andy Hall. The charges in this case related to an interview Hall gave to Al-Jazeera in Myanmar in April 2013 concerning his earlier criminal prosecution by Natural Fruit Company Ltd. This particular case had already been dismissed twice by courts of both first and second instance (Prakanong/Appeals Court) on the grounds of flawed unlawful interrogation processes during police investigation of the case and given the allegedly defamatory act was committed in Myanmar.

In a statement issued today following the ruling, Hall said:

‘Following dismissal of the case, I have no choice but to now launch counter litigation against Natural Fruit, the Prosecutor, Police and the Attorney General for unlawful prosecution and for perjury. I do so with deep regret and not at all in anger or through any desire for personal retribution. It is necessary to launch these counter prosecutions simply because I must defend myself fully against judicial harassment by Natural Fruit that shows no signs of abating.’

‘The Supreme Court’s ruling is of course a huge relief but it does not vindicate Hall’s earlier conviction and suspended prison sentence in a case also brought by Natural Fruit less than two months ago.
However, the campaign of judicial harassment that has been waged against Andy Hall for almost four years now has already sadly been successful. As many have feared, this campaign has also had a negative impact far beyond the case of Andy himself. We have heard from a number of migrant workers and activists how they are now deeply afraid to speak out on abuse workers face from Thai employers after Andy Hall’s recent conviction,’ said Sonja Vartiala, Executive Director of Finnwatch.
‘A real stain has been placed on Thailand’s reputation, in particular as an acceptable country to do business in. Companies which source from Thailand need to think really hard whether they can be confident that they can adequately monitor their supply chains when the voices of workers and those who defend them are being chillingly silenced,’ she added.
Less than two months ago on September 20th 2016, the Bangkok South Criminal Court found Andy Hall guilty in the other criminal case on charges of criminal defamation by publication and Computer Crimes brought by Natural Fruit against him.
He was subsequently sentenced to four years’ imprisonment, reduced by one year and suspended by two years and ordered to pay a fine of 200, 000 baht reduced to 150,000 baht. Once the fine was paid to the Court by Thai Union Group, the Thai Tuna Industry Association and Finnwatch, Andy Hall was released from temporary detention, his passport returned and restrictions on his freedom of movement removed.
The surprise guilty verdict drewstern criticism from around the world including from the UN, the ILO, the European Parliament and European Trade Commissioner Cecilia Malmstrom.

Andy Hall and his legal team are currently preparing to appeal the Bangkok South Criminal Court conviction on grounds of both fact and law but have yet to receive a written copy of the verdict to be used as the basis of the appeal. The Supreme Court ruling in this Aljazeera interview case on 3rd November will have no impact on the suspended prison sentence Hall was given on 20th September.
Two civil defamation claims for damages of 400 million baht brought by Natural Fruit Company Ltd against Andy Hall are still pending resolution of the two criminal cases. Natural Fruit filed all four cases against Hall following publication of the Finnwatch report Cheap Has a High Price in January 2013. Hall coordinated field research and conducted migrant worker interviews for the report which outlined migrant worker interviewee allegations of serious labour rights violations at the company’s pineapple processing plant.
‘Following dismissal of the case, I have no choice but to now launch counter litigation against Natural Fruit, the Prosecutor, Police and the Attorney General for unlawful prosecution and for perjury. I do so with deep regret and not at all in anger or through any desire for personal retribution. It is necessary to launch these counter prosecutions simply because I must defend myself fully against judicial harassment by Natural Fruit that shows no signs of abating.’

A strategic lawsuit against public participation (SLAPP) is a lawsuit that is intended to censor, intimidate, and silence critics by burdening them with the cost of a legal defense until they abandon their criticism or opposition.Such lawsuits have been made illegal in many jurisdictions on the grounds that they impede freedom of speech.

The typical SLAPP plaintiff does not normally expect to win the lawsuit. The plaintiff’s goals are accomplished if the defendant succumbs to fear, intimidation, mounting legal costs or simple exhaustion and abandons the criticism. In some cases, repeated frivolous litigation against a defendant may raise the cost of directors and officers liability insurance for that party, interfering with an organization’s ability to operate. A SLAPP may also intimidate others from participating in the debate. 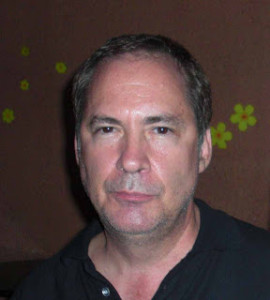 Multiple SLAPP cases were brought against me by fake lawyers Drew Walter Noyes, from Wilmington, North Carolina, and Brian Goudie, from Falkirk, Scotland, who posed in Thailand as lawyers to cheat tourists and expats.

Warrants of arrest have been issued against both after they were found guilty of criminal offences. In the case of Noyes he was jailed for two years for extortion and Brian Goudie who was jailed for three years for fraud and embezzlement. 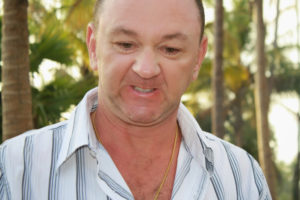 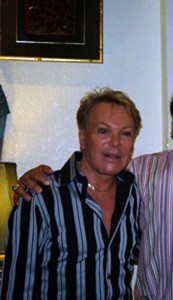 In the case of the dodgy Pattaya businessmen I published a story in the UK media about Gordon May and James Lumsden and the substance of these stories was also in two reports I made for the Bangkok Post. James Lumsden sued in Thailand against claims they he had defrauded two investors out of some £500,000.

One of the investors Iain Macondald, the son of a former Provost of Inverness, died in a fire on the premises of the Ambiance Hotel in Pattaya which he had bought a half share of, and the second was arrested for narcotics. 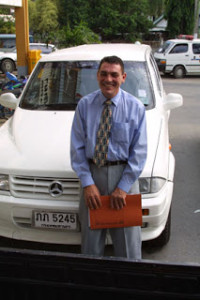 Kevin Quill (left)
A non drug user some 98 yaa bills were found in a consignment of 200 carts of cigarettes the businessmen Kevin Quill had arranged for him to take to the UK. I had to find my own lawyers. I was convicted at the lower court. Both cases were dismissed at the Appeal Court on the grounds I was a journalist carrying out work in the public interest but at the Appeal Court I was found guilty in one case and acquitted in the second case.

The judges ruled that as I had stated that Iain Macdonald, 29, had made an illegal

Iain Macdondald – blue shirt
will a month before his death leading all his Thai investments to the gay boyfriend of Gordon May, and that May and Lumsden were the real beneficiaries, as they took over all his properties and refused to give them to his next of kin, I was suggesting James Lumsden may have been party to a murder.

In fact I never stated as such, though I readily admit people could come to that conclusion.

An Assistant Commissioner of the Thai police General Noppodal Somboonsup had apologised to the British Embassy admitting having reviewed the evidence that he believed Quill had been ‘framed’.

I’m still waiting for my bail monies and fines to be returned. 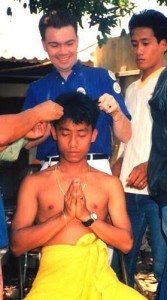 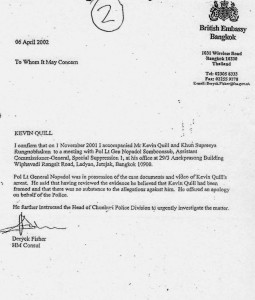 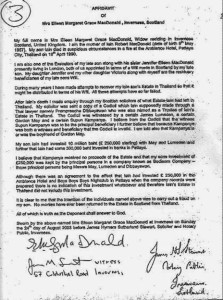