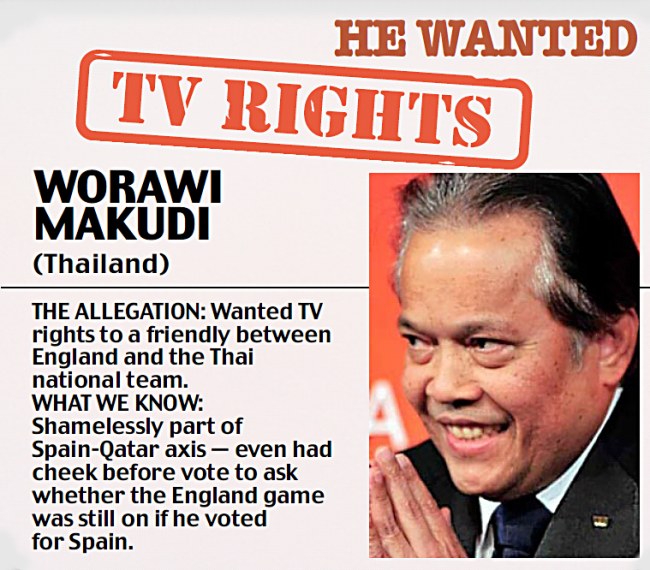 Its just another blow to the FIFA the world governing body of football. The Forrmer British FA Chairman Lord Triesman has accused four members of FIFA of demanding bribes to support England’s bid to host the 2018 world cup.
One of them is Worawi Makudi Thailand’s FIFA representative who said Lord Triesman wanted TV rights for a friendly match between Thailand and England, a match which has since been cancelled indefinitely.
Worawi Makudi is also the big name behind Siam Sports Syndicate, which produces numerous newspapers, available in all 7/11s in Thailand and elsewhere, and also TV spots channels. The syndicate also does a lot of hosting of teams visiting Thailand

How the Daily Mail ran with the Worawi Makudi allegation

FIFA Vice President Jack Warner, said Lord Triesman, wanted 2.5 million pounds to build an education centre in Trinidad and he also wanted 500,000 pounds to buy Haiti’s TV World Cup rights, to ‘raise the spirits of a nation’, though the money had to go through Warner, in whose name they appeared to be in.
He also said Nicolas Leos FIFA member for Paraguay demanded a Knighthood and that Brazil’s member Ricardo Telxeira told him: ‘Come and tell me what you have got for me’
This story is not particularly new to journalists covering the scene. Both the Mail on Sunday and Sunday Times newspapers in Britain  have already started outing the scandal. Still it kept me up all last night answering calls from desks in the UK.
You can see Lord Triesman making his allegations on Youtube

UPDATE: At a press conference in Bangkok on May 16th Worawi completely rejected any allegations of bribery. He said: “The accusation of Lord Triesman against me that I had requested TV rights is baseless. I have evidence to defend myself that the accusation is baseless and nonsense.
“My evidence is official letters, important letters from the English Football association to the Football Association of Thailand”
His lawyer Steve Burkill added: “We consider that Lord Triesman has falsely defamed Dr. Worawi. And this has already caused Dr.Worawi damage to his reputation and that of his family. And we can but wonder why Lord Triesman has said what he said.”
“Accusations like these are very easily made. And Lord Triesman so far hasn’t produced any evidence to support his allegations”