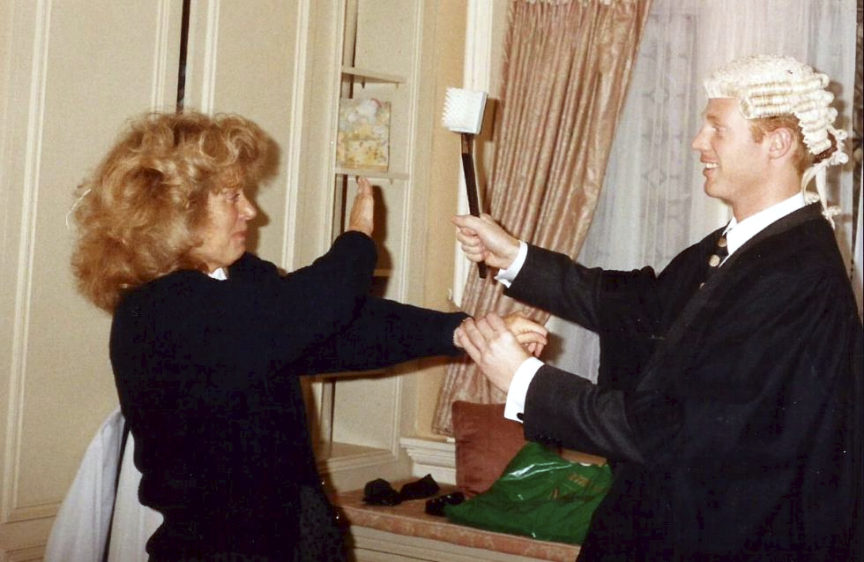 Two top Thai government officials have been ordered to court accused of defrauding a British barrister whose mother claims was murdered on the holiday island of Phuket.

The barrister Steven Granville (above) was severely beaten and had to be evacuated back to Britain where he spent four years in a vegatative state before dying of his injuries, claims his mother. Meanwhile he was robbed of his dream resort.

The officials, one an advisor to the Prime Minister and the second, an anti-corruption commissioner now control ‘The Lost Kingdom’ resort on the island of Phuket owned by British barrister Steven Granville and foreign investors. The project in the making was valued at £74 million in a civil case for damages.

Named as Nattachai Srirungsukpinit, and Peerasak Srirungsukjinda the officials have been ordered by Thailand’s Supreme Court to attend trial in Phuket in January 22nd. Also charged is Granville’s former lawyer Songsak Pue-Kliang, who is alleged to have played a pivotal role in the alleged fraud.

Lawyer Steven Granville, who was called to the bar in 1991, was flown to Britain in 2013 suffering from traumatic head injuries, which Thai police said were the result of a motorcycle accident on Phuket. He later died in Barnstaple Hospital, Devon.

But Granville’s mother Samantha, 76, and step-father Trevor Simmonds, 85, (left) from Boscastle, North Cornwall, claim that the crash scene was stage managed. Their son, they said, died from severe blows to the back of his head. There were no other injuries on his body. No abrasions. No clothing was torn ‘not even his white chinos’. And hospitals said the injuries were not consistent with a road accident.

In a related case a former Deputy Commerce Minister Banyin Tangpakorn has been charged in Thailand with the murder for gain of a Chinese-Thai businessman. In that case the victim’s death was also covered up as a road traffic accident. The businessman Chuwong Sae Tang. was later found to have been beaten to death and then placed in his car which was run against a tree.

The businessman’s stolen shares were later found to be in the property of employees and relatives of a financial company called AEC run by former government official and MP, Praphol Milinthajinda, as its Managing Director and Deputy Prime Minister, Wissanu Krea-ngam as its Chairman.

Praphol Milinthajinda, worked as the agent for Nattachai, an advisor to Prime Minister and 2014 military coup leader General Prayuth Chan-ocha, and Nattachai’s brother Peerasak a member of the government’s ‘Commission to Investigate Corruption & Misconduct and Enhance Good Governance’.

Alarmingly Praphol is the first defendant in a civil case brought by Mrs Simmonds for £74 million in damages. The other two defendants are two young Thai women into which the officials transferred the ‘Lost Kingdom’ – known in Thailand as the Puravana – a resort which Granville hoped would make the world’s top ten listings. He, it is alleged, was the manipulator behind the fraud.

It is alleged that through Praphol the two government officials offered to invest in the project after Granville ran into financial troubles when Spanish investors pulled out of the project. Through Praphol asked for the company shares as a guarantee against their own investment, but they never invested a penny.

The Thai government has announced a crack down on corrupt officials and ‘influential people who do no good for society’. But earlier this year its Deputy Agricultural Minister Thammanat Prompao was exposed as a convicted heroin trafficker who was jailed in Australia for trafficking in 3.2 kilos of Chinese white.

And Nattachai Srirungsukpanit was in 2011 ordered by the New South Wales Supreme Court to pay back AUS$5.3 million, his part of some A$8.85 million in cheques he and a group of Thai Chinese ‘whales’ bounced at the Star Casino in Sydney.

Peerasak’s company Absolute World Power was named as one of three companies illegally importing toxic waste ‘to the detriment of Thailand’ after police raids earlier this year. Police announced the culprits could go down for ten years. But the New York Times reported this week that the companies had merely been punished with fines.

Mrs Simmonds, who has complained of lack of help from the Foreign Office said today:

“I ask, no I beg, the Thai people to put an end to their untouchables and ask the government to carry out its promise to bring its infamous villains to justice for their crimes. Thai Police have done nothing despite promises. I am fighting not only for my son and his investors, but also for the mothers and fathers of children who have died in recent years Thailand under suspicious circumstances.”

In Thailand Vincent McGowan, from Bournemouth, Hants, the former sales and marketing manager for the Puravana, has been handling the mother’s cases and has lodged a request for a review by the Supreme Court of ‘misbehaviour’ in the court in Phuket in the civil case.

This relates to a document found in the court which shows how a judgement by a panel of judges in favour of the family was changed at the last minute by one judge by drawing a line through just one paragraph.

So far legal action has been supported by investors to the ‘Lost Kingdom’ but now he says he will have to start a Go Fund Me page to continue the battle.

Two days before his death Granville had rung his mother to say he was in trouble ‘I think I have done a deal with the mafia.”

Said Vincent: “The day before his death he told me that he needed to leave Thailand or he would be killed.”

A Foreign and Commonwealth Office spokesman said: ““Our consular staff are supporting the family of a British man who died in 2017 following an incident in Thailand and remain in contact with the Thai police.”

NEXT – Corruption? Prove it! Where are the receipts? A receipt for corruption uncovered.