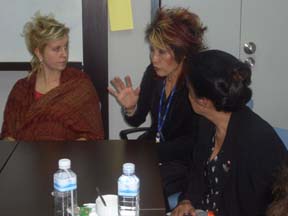 SHOOTING DEATH
Police tale fabricated: Pornthip
NHRC wants DSI to take over Pai inquiry publish on February 9, 2008
Top forensic doctor Pornthip Rojanasunan has rejected the police account
of the shooting of two Canadians, one of whom was killed, in the
northern town of Pai last month.
Pornthip has been studying post mortems carried out both in Calgary,
Canada and in Chiang Mai. She said this week that police claims that Leo
del Pinto, 24, had been shot from below by a local policeman ‘as he was
falling to the ground’ did not match the evidence.

‘What the police say is just not possible. Evidence shows that the
gunman was above Leo when he was shot in the head,’ she said at the
Maharaj Chiang Mai hospital after studying medical records.
Picture: Carly Reisig with Dr. Pornthip and assistant to Canadian Honorary Consul in Chiang Mai

‘One bullet went through his abdomen, piercing his kidney and liver, and
the entry and exit points were at quite similar points. The bullet that
entered the man’s head entered through his right cheek, went down
through his larynx and was embedded under his shoulder,’ she said.
Her comments add to a growing belief that the inquiry by local police
into the incident is a sham, designed simply to get their colleague off
the hook.

The National Human Rights Commission (NHRC) is set to formally request
the Justice Ministry’s Department of Special Investigation (DSI) take
over investigation into the shooting of del Pinto and Carly Reisig.

Rights Commissioner Surasee Kosolnavin, who has been looking into the
case with the DSI’s Colonel Piyawate Kingkate and Pornthip, also
indicated a range of concerns about the police probe.

‘The most telling point of all is that police have given evidence that
the bullet which hit Carly Reisig also hit Leo del Pinto. It is not
possible,’ said Commissioner Surasee. ‘So we are starting from that
point and going back.

Human Rights Commissioner Surasee Kosolnavin with NHRC team at  Pai police station
‘There are reports that the policeman has been charged with murder
and attempted murder, but no such charges have been brought. They have,
however, now been put to the officer [at the court hearing on Wednesday] ,and we will be referring the case to the governing board of the DSI
and recommend they take over the investigation.’
Prime Minister Samak Sundaravej may be asked to decide whether the DSI
should take over the case, as the new PM is understood to head the
committee that will consider the matter.
Reisig and del Pinto, both 24 and from British Columbia, were shot in the main street of Pai at about 2am on January 6.
Pai Police Sergeant Uthai Dechawiwat was freed without bail after
admitting to shooting the two Canadians. He pleaded not guilty in Mae
Hong Son Court on Wednesday to charges of murder and attempted murder.
But Uthai’s claims to have acted in self-defence after a fight erupted
when he confronted the two tourists and that his gun discharged
accidentally are contentious.
Reisig told the court on Wednesday she had been pistol-whipped then shot
in the chest and that del Pinto had been fatally shot straight
afterwards, despite having his hands in the air and pleading with Uthai
to ‘Stop! Stop!’
Reisig’s account has been backed by two local witnesses, now in
protective custody, who have given their account to the NHRC and DSI in
Bangkok.
Andrew Drummond
Special to The Nation
Mae Hong Son