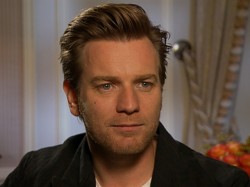 Production of the Hollywood film ‘The Impossible’ had to be stopped in Thailand after actor Ewan McGregor appeared to receive a death threat in verse from his stand-in.

The crew for the film, centred on a British family’s ordeal during the 2004 Boxing Day Tsunami, had to stand down after a stand-in for star Ewan McGregor was found in his trailer writing poetic death odes to the Hollywood heart-throb.

The stand-in, an American living in Thailand, was caught writing a poem telling of McGregor’s death.  The poem included a line about the author facing McGregor ‘twisting the knife as I look into your eyes’.  His poem was read by a member of the crew looking over his shoulder.

The incident happened in Phang-na, Thailand, scene of some of the worst devastation during the 2004 Tsunami in the Indian Ocean and the stand-in had even been given space in McGregor’s temporary trailer.

A member of the local production crew Santa Films said: ‘We could not call Thai police because the man had only written poetry, and they would be unlikely to understand.  Instead there was no confrontation.

‘The actor was told that he would not be needed for a week and he would be called when it his  time was due. He was not called. He looked a little wide-eyed and pre-occupied. The producers decided that he was a serious risk.

‘His position as stand-in was not important. It just means he is on set when McGregor is not and stands in so the cameraman can see what the scene will look like.  It’s only paid about ?60 a day.

‘I understand he later applied for a position on ‘Scorpion King 3′ which is filming in Thailand at the moment. I hope there is no further problem.’

In ‘Impossible’, directed by Juan Antonio Bayona, Ewan McGregor stars with actress Naomi Watts. They play a couple ‘Henry’ and ‘Marta’ on holiday with their three sons Tom, Simon and Thomas. The whole family are swept away by the Tsunami as they bask around their swimming pool.